PDF The Perfect Sound: A Memoir in Stereo 22 February 2022 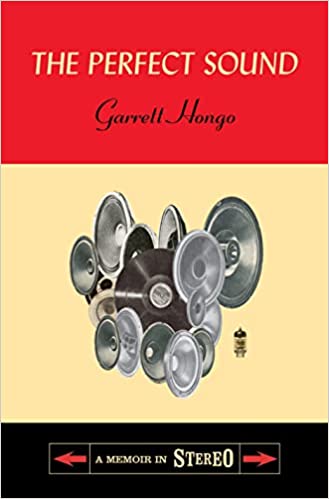 From here in my stereo room, in my day basement ten steps down from my entry hallway, much can seem perfect if I close my eyes and just listen. I’ve all my gear arranged in front of me, across the immaculate, midnight-blue Chinese carpet and against the acoustic-paneled wall opposite where I sit in my leather club chair—an acquisition from Pottery Barn during my middle-aged bachelor days. So much born of savings and sacrifice, but I hardly care, since the sound here is so gorgeous it lifts me out of things into a pure fabric of wonderment, adrift amidst all the sublime welter of notes. I start with piano music in the morning, Mozart or Beethoven concertos performed by the likes of Alfred Brendel or Claudio Arrau, their right-hand runs so liquidinous across the keyboard it’s as though a clear water of crystalline singing were running over a streambed of orchestral accompaniment. I glance at the gleaming enameling on my speakers, brows-high, piano-black towers that mirror the inset ceiling lights when I switch them on, and I begin to want to flutter my hands like seabirds barely aloft over a dance line of shorebreak waves and indulge myself in this rapturous sequestration with music all around me.

During the days, mostly all my own because of my university teaching job (I teach classes once or twice a week), I switch among genres all the time, playing fifties combo jazz when I tire of classical, classic blues-rock when I want to stir things up (Cream, Santana, or the Allman Brothers), or even an opera if I have two hours together before an errand or a duty calls me away. I don’t like interrupting the drama of an opera, its outsize grandiosity commanding a kind of narrowed attention, otherwise the spell of its fiction would collapse from the recognition of its absurdity. You live in its concocted, sauced-up emotions and situations as much as in its music, so you can’t just break a spell once it’s been cast. You have to give in to its supreme fiction, mad scenes, murders, and suicides, its love-on-a-tubercular-shoestring plot, or else it dies as egregious caricature compared to the sedate, suburban lives most of us lead.

My equipment has been painstakingly selected and then frequently changed over the years as I’ve evolved in the audio hobby. Fifteen years ago, I started out simply wanting a good CD player, then was captivated once I heard what it could do, and off I went down the rabbit hole into this new universe, just listening to music all the time, every day, all the day long. For two or three years, I spent way too much time browsing audio mags and the Internet, lusting after new and better equipment, auditioning and acquiring it, and then quickly moving on to something else. Now my gear list is a little exotic, and, I’m willing to say, it has gotten completely ridiculous. I’ve a German-made turntable, weighing forty-five pounds and sporting two tonearms for which I have numerous phono cartridges, both mono and stereo. I’ve a Japanese SACD player (with the appropriate brand name “Esoteric”) that weighs thirty-one pounds, has a sculpted frontal look, can play SACDs and also upsample Red Book CDs (a mere 16/44.1 kHz in resolution) through five additional PCM settings on up to DSD64. Got that? Through its USB inputs, it can even accept and convert digital files stored on an external hard drive and sent through a computer. It’s three years old, perhaps twice a lifetime in digital electronics, but it’s also very good, and I like it for its warmth and smoothness, especially with orchestral violins and operatic voices, which I’ve found the most challenging sounds for a digital source to reproduce well. Oh, I’ve an up-to-date Wi-Fi streaming device as well, Chinese-made in Beijing (bless the New World Order), that can capture digital signals transmitted wirelessly. The device has access to a half a universe’s worth of files stored in the cloud somewhere by Apple, Tidal, Qobuz, or Spot-the-Fly. So you can all relax. Despite my fondness for vinyl, I’ve not been left behind as things have shifted over to computer-and network-sourced audio. My tubed preamp and tubed stereo power amp, made by a sedulous boutique designer in Osaka, a quiet though intense man who named his company, quite cleverly, after the millennium-old pronunciation for the ideograms of his sixteenth-century name, morphing the familiar into the recondite, transforming Yamada into Zanden. His gear has vacuum tubes all over it. The myth is that sound gets increasingly better as technologies improve, and maybe so, but a lot of us in this hobby just don’t buy it. We’ve gone backward to old audio tubes no longer manufactured (we find them at estate sales and through commercial dealers who dig them up in military surplus dumps, warehouses in Eastern Europe, and from old collectors) and hand-wound electrical transformers, heavily lacquered wood-bodied phono cartridges, mono LPs from the fifties and sixties, and even to 78s from earlier than that. In a lovely, modern home amidst deciduous woods on Long Island near Dix Hills, where John Coltrane lived, I once heard brand-new, two-way speakers fashioned after old Western Electric movie-theater speakers from the 1930s. But my own speakers, I have to confess, derive from more recent German technologies and are fairly complicated affairs. I won’t go into it now, but take my word, there’s some meticulous engineering involved. They’re each as big as a human being, weighing 265 pounds apiece. And from them I get a sound that, as Sam Cooke used to say, sends me.

My listening room takes up just over half of a twenty-eight-foot-by-twelve-foot space in the finished basement in an attractive three-bedroom, two-and-a-half bath trilevel, built in 1979, the deed told me—the first house on my particular street in the South Hills of Eugene, before the subdivision of McMansions on the top of the hill at the edge of town, before the other nondescript, thin-walled dwellings filled in all the cul-de-sacs and lots between us super-peons and the sub-one-percenters above. When the house was shown to me—by my real estate agent, a handsome and enthusiastic fifty-something fellow from Ashland (or Baja Oregon, as we call it)—my future stereo space was a TV room with a sofa and chairs and walls painted the color of blighted temple moss. But I immediately puffed my chest out and thought, Here is my dedicated listening room, finally, in my mind throwing up the IKEA cabinets for LPs that would divide it from the other end of the room, where I’d install my study and bookcases for my poetry library (Loeb classics, Everyman’s editions of the Renaissance and Metaphysical poets, and Atheneum and Knopf contemporaries).

I am a poet. It’s odd to say it, but that’s what I’ve done for most of my adult life—study poetry, teach it at universities, and write it. It’s more than unusual, but it was such a passion of mine since my undergraduate days, when poets galore would visit my college, read from their thin but elegantly printed books, and captivate all of us with lyrics about a bucolic childhood on an Irish farm, working as a punch-press operator in a Detroit automobile factory, or sitting zazen in a Japanese Buddhist monastery. They gave such meaning to humble things and experiences, such homespun familiarity to the most arcane of esoteric wisdom literatures. I even remember a man in a medical gown reading from a hospital bed that stagehands wheeled into the pit of our amphitheater classroom, where I’d listened to lectures on Shakespeare’s comedies. The poet said he was a pacifist and read aloud, paging through a loose-leaf manuscript and a leather-bound notebook, poems against the war in Vietnam, his voice quavering at times with weakness or passion. In each case, no matter who the poet was or what they wrote about, I heard an unmistakable ring of eloquence and sincerity in their words, a syntactical music that seemed to empower their willingness to speak their minds, a kind of bravery, and I wanted to be that. It was a feeling from within my chest, stirrings like a forest of seedlings suddenly sprouting through the litter of withered leaves and veining grasses on the broken asphalt that was my unformed identity, battered from the start in poor, urban public schools.

“Soulful . . . Hongo delivers a memorable memoir on reflection and artistry, as rendered through his audiophile tendencies . . . As he describes in lyrical, fervent passages, his penchant for spinning vinyl on cheap turntables would eventually become a love for elaborate equipment, amplifiers, speakers, and vacuum tubes . . . [A] paean to the power of music.” —Publishers Weekly

“Music throbs in the background throughout this spirited memoir . . . Along the way, the author offers a history of the invention of the vacuum tube, amplifiers, and the various permutations of the phonograph. A memoir of self-discovery via homage to the richness of sound.” —Kirkus Reviews

“Contrary to Marcel Duchamp’s quip that one can look at seeing but cannot hear hearing, in The Perfect Sound we hear the proverbial juice flowing, or blood rushing, in the soul of a poet acutely attuned to a world of sounds. From his first soundscape of ocean surf in Oahu to Rabelais’s fantastical sea of frozen words, from cicada to Aeolian harp, from La Bohème at La Scala to the Heart Sutra at a Kyoto temple, Garrett Hongo ingeniously mixes personal memoir with cultural history and offers us an indispensable guide for the search of acoustic truth.” —Yunte Huang, author of Charlie Chan

“Garrett Hongo is among writers who believe you can save everything, everyone—if only their music put into written words. Obsessively building and rebuilding audio machines, he recovers his Hawaiian childhood, his gone family, and the ancestors. The Perfect Sound is an enlightening read. —Maxine Hong Kingston, author of The Woman Warrior

“Garrett Hongo is a master, but be advised: this memoir will have you spending hundreds of dollars on audio devices, and hours of delight and even awe as you read. It is not all about stereos—it is an aria of living, hearing, feeling, writing. Masterful.” —Luis Alberto Urrea, author of The House of Broken Angels

“Journeying with this gifted memorist into the heart of the ‘perfect sound’ is to engage with special harmonies of ecstasy and heartache. Erudite, sensual, frank and delightful, Garrett Hongo has always been for his devoted readers a singular kumu mele, our spirit guide to lovely song.” —Chang-rae Lee, author of My Year Abroad

“‘Exuberance is beauty,’ says William Blake, and this is a truly exuberant book: exuberant about music, about language, about life. Read and drink in its spirit!” —Mark Edmundson, author of The Fine Wisdom and Perfect Teachings of the Kings of Rock and Roll

"A quest organizes the telling of a life. In his memoir, The Perfect Sound, Garret Hongo’s deeply informed and passionate quest to bring recorded music to life ingeniously parallels his development as a poet seeking a voice that will become his recorded identity." —Stuart Dybek, author of Childhood and Other Neighborhoods

“Picking up where he left off in Volcano, Hongo shifts the focus in this new memoir from Hawaii to the wide-ranging soundtrack of his long life, well lived on three continents. His clean, poetic prose and dry sense of humor about his quest for the hypermaximal gear to hear it all anew are two of this book’s many pleasures.” —James McManus, author of Positively Fifth Street
Нажмите, чтобы прочитать больше...