PDF The Book of Music and Nature. An Anthology of Sounds, Words, Thoughts Second edition 2009 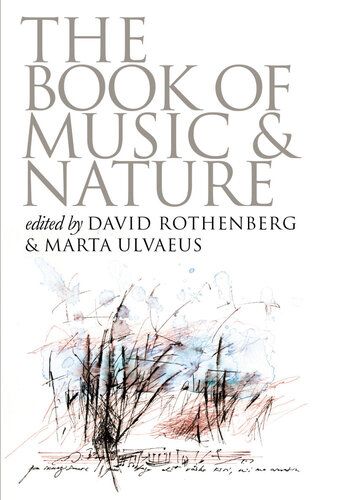 This innovative book, assembled by the editors of the renowned periodical Terra Nova, is the first anthology published on the subject of music and nature. Lush and evocative, yoking together the simplicities and complexities of the world of natural sound and the music inspired by it, this collection includes essays, illustrations, and plenty of sounds and music. The Book of Music and Nature celebrates our relationship with natural soundscapes while posing stimulating questions about that very relationship. The book ranges widely, with the interplay of the texts and sounds creating a conversation that readers from all walks of life will find provocative and accessible. The anthology includes classic texts on music and nature by 20th century masters including John Cage, Hazrat Inrayat Khan, Pierre Schaeffer, Rainer Maria Rilke, and Toru Takemitsu. Innovative essays by Brian Eno, Pauline Oliveros, David Toop, Hildegard Westerkamp and Evan Eisenberg also appear. Interspersed throughout are short fictional excerpts by authors Rafi Zabor, Alejo Carpentier, and Junichiro Tanazaki. The compact disc includes fifteen tracks of music made out of, or reflective of, natural sounds, ranging from Babenzele Pygmy music to Australian butcherbirds, and from Pauline Oliveros to Brian Eno.

Some say music is the universal language. This couldn’t possibly be true. Not everyone speaks it; not all understand it. And even those who do cannot explain what it says. No one knows how music speaks, what tales it tells, how it tugs at our emotions with its mixture of tones, one after another, above and below.

You can be moved by music and have absolutely no idea what is going on. Language is not like that. You must be able to speak a language to know what is being said. Music is only in part a language, that part you understand when you learn its rules and how to bend those rules. But the rest of it may move us even though we are unable to explain why.
Nature is one such place. It can mean the placewe came from, some original home where, as Nalungiaq the Netsilik Eskimo reminds us, “people and animals spoke the same language.” Not only have we lost that language, we can barely imagine what it might be. Words are not the way to talk to animals. They’d rather sing with us—if we learn their tunes without making them con- form to ours. Music could be a model for learning to perceive the surrounding world by listening, not only by naming or explaining.

For to know and to feel the meaning of music are two diVerent things. We may not know the reason why the coyote is howling, or have any idea why the brown thrasher sings nearly two thousand songs. (Scientists haven’t a clue why this one bird needs to know so many more tunes than any other.) With only a little eVort, the whole world can be heard as music. We can hear sounds whose meanings are not intended for us as if they were music and soon call them beautiful. This is part of music’s power.

This book considers the many ways music can engage and define nature. Music here becomes a form of knowledge, if you will, that links us more closely to the reverberations of the surrounding world. As soon as you begin to pay attention, the borders become less clear. On the enclosed disc you will hear an Australian bird that sounds as controlled in its singing as a human composing a tune on a flute. You will hear compositions that mirror the workings of nature in their manner of operation, an aesthetic dream most often attributed to John Cage. Cage learned of it from art historian Ananda Coomaraswamy, who had extracted it from Aristotle’s vision of techne—a word that once meant both “art” and “tool.” Addressing nature as a manner of operation, we complete processes that have been left unfinished, leaving a place for the ingenuity that so marks human presence on the earth.

But no music can exist without the given ways that sound behaves, with or without the human impulse to organize and perceive it. At the same time, music seems to be about little else beside itself — the play of tones up and away, the game of noise and silence.

Once I rode east, from Reykjavik, on a jacked-up bus with huge balloon tires, over moraines and outflows beneath a great glacier in southern Iceland. My companion, Elias Davidsson, was a former orchestral composer who now makes music by banging on stones collected from the far corners of his coun- try. “Many people collect stones,” he remarked, “but usually they choose those that look or feel a certain way. I instead go for the sound. I hold the rock up in the air. I suspend it from wires or strings. Then I strike it with mallets or with other stones, building xylophones of strange complexity. This is the music I make out of this country.”

A party was under way when we arrived at the tiny stone hut in which we would live for several days. Twenty farmers and their families had walked over the glacier from the other side, a journey of several days. They were members of a choir that had been formed in a remote community by one of the farmers who had become crippled years ago and could no longer work the land. So a while back he had started this singing group and brought music to this isolated village. Now the group had carried him over the mountains to this hut to celebrate their tenth anniversary.
The music was loud, boisterous, and billowing with a unique joy. The sun never went down, and never came up; rushing clouds and fog that blew steadily oV the ice filled the constantly gray sky. I pulled out my clarinet — the instrument that comes with me wherever I go — and the reason for carrying it everywhere suddenly became clear. There is music all over the world, resound- ing from inside mountain shacks, echoing oV melting ice and tumultuous rivers. I don’t consider all of it good, but this was one of those moments worth traveling so far to hear.

The music I yearn for comes out of nature but sounds as if from a world far from home. There is a virtue in finding a song that moves from the familiar into the unfamiliar. This way miracles arise out of the everyday. I once heard Indian santur master Shivkumar Sharma play in a vast auditorium. The sound system went dead, and because his instrument, a refined hammer dulcimer, is very quiet, the huge crowd had to sit in utter silence just to pick up the faintest strains of his raga improvisations. The drums and the drone became so imperceptibly soft, we all dared not move, since the slightest noise might obscure the sudden beautiful sound experiments.

Sitting as quietly as possible, listening carefully for faint expressions, the whole audience had learned suddenly to hear in a new way. The music had released us into hearing nature for what it is: a vast unstoppable music—what Murray Schafer named a soundscape—as inescapable for us as the landscapes that enable us to stand out from and also be a part of them. Sounds define us, hold us in, lead us away. They announce themselves to us; they call from all over the world. We cannot close our ears.

It is no great challenge to hear all sounds as music—the whole history of music in our time has pointed the way toward this. Classical musicians broke down the rules of harmony in this century to welcome chance as well as noise into the mix of organized sound. Popular musicians, seeking ever more vari- ation within accessible constraints, have sampled beats, noises, whirrs, and chirps from all available sources. And jazz musicians have improvised over sound changes as well as chord changes. If music is progressing anywhere, it is toward a blurring of boundaries, toward what Steven Feld calls a schizophonia, which makes it impossible to know where any sound is coming from or what it might musically mean.

The eighteenth-century composer Vivaldi wrote a “Goldfinch” concerto in which the flutists are supposed to play just a little bit like a goldfinch. And in our century, Olivier Messiaen meticulously transcribed birdsongs and required that the orchestra play them note for note. Today we might jam with the birds or play their sounds directly out of inscrutable black-box machines. Modernity in music has really prepared us to accept sound merely as sound, as harmonic rules have been bent and twisted so much that they finally fall away. This is no culmination, only a beginning of a cross-cultural journey that will in no time have us concerting with kookaburras and flamingos as a matter of course.

Our contributors have found music in natural sounds, or made music out of wild material, or made music that sounds as if it came straight out of nature, even if the source of the songs might be wholly artificial. The writings consist of musings by composers on their own work, reports of wild sound-gatherings, and tales where music and nature surprisingly converge.

When you have finished reading and listening to this clamorous collection, we hope you will be so riveted by the sound of the whole world that you will be unable to turn away from it no matter how much our regular lives encourage us to think of no one but human beings like ourselves. Life sings and improvises from molecules to galaxies. Sound speaks to us yet has nothing spe- cific to tell. The melodies of the world are what they are. Nothing less, nothing more. You should never be afraid to listen.
Нажмите, чтобы прочитать больше...