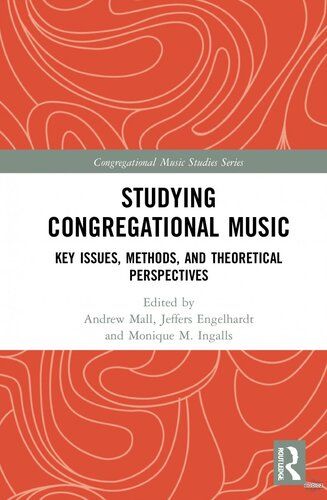 Studying the role of music within religious congregations has become an increasingly complex exercise. The significant variations in musical style and content between different congregations require an interdisciplinary methodology that enables an accurate analysis, while also allowing for nuance in interpretation. This book is the first to help scholars think through the complexities of interdisciplinary research on congregational music-making by critically examining the theories and methods used by leading scholars in the field.

An international and interdisciplinary panel of contributors introduces readers to a variety of research methodologies within the emerging field of congregational music studies. Utilizing insights from fields such as communications studies, ethnomusicology, history, liturgical studies, popular music studies, religious studies, and theology, it examines and models methodologies and theoretical perspectives that are grounded in each of these disciplines. In addition, this volume presents several “key issues” to ground these interpretive frameworks in the context of congregational music studies. These include topics like diaspora, ethics, gender, and migration.

This book is a new milestone in the study of music amongst congregations, detailing the very latest in best academic practice. As such, it will be of great use to scholars of religious studies, music, and theology, as well as anyone engaging in ethnomusicological studies more generally.

Andrew Mall is Assistant Professor of Music at Northeastern University in Boston, Massachusetts, USA. He teaches courses in ethnomusicology, music industry, and popular music studies. He is the author of God Rock, Inc.: The Business of Niche Music (University of California Press, 2021) and Book Review Co-Editor of the journal Ethnomusicology.

Jeffers Engelhardt is Professor of Music at Amherst College, Massachusetts, USA. He teaches courses in ethnomusicology focusing on community-based ethnography, music and religion, voice, and analytical approaches to music and sound. He is Editor-in-Chief of the Yale Journal of Music and Religion and Digital and Multimedia Editor of the Journal of the American Musicological Society.

Monique M. Ingalls is Associate Professor and Graduate Program Director of Church Music at Baylor University in Waco, Texas, USA. She is the author of Singing the Congregation (Oxford, 2018), coeditor of three books on congregational music- making, and series editor of Routledge’s Congregational Music Studies Series.

Congregational music-making is a vital and vibrant practice within Christian communities worldwide. Music can both unite and divide: at times, it brings together individuals and communities across geographical and cultural boundaries while, at others, it divides communities by embodying conflicting meanings and symbolizing oppositional identities. Many factors influence congregational music in its contemporary global context, posing theoretical and methodological challenges for the academic study of con- gregational music-making. Increasingly, coming to a robust understanding of congregational music’s meaning, influence, and significance requires a mixture of complementary approaches. Including perspectives from musi- cology, religious and theological studies, anthropology and sociology of religion, media studies, political economy, and popular music studies, this series presents a cluster of landmark titles exploring music-making within contemporary Christianity which will further Congregational Music Studies as an important new academic field of study.

Congregational music-making has long been one of the most potent and portable Christian religious practices, holding immense significance for Christian communities worldwide. Congregational music ranges across boundaries of region, nation, and ecclesial tradition, creating sonorous ways for its participants to create, maintain, and challenge individual and communal identities. In the late twentieth and early twenty-first centuries, the advent of new media technologies, the mass migration of Christian populations domestically as well as internationally, and the avenues of distribution widened by global capitalism have rendered many Christian musical traditions eminently mobile. Now, the sounds and images of musicking bodies—whether transmitted via sound recordings, radio waves, or binary code—are taken up as embodied worship practices in new places. Congregational music-making is a rich and multifaceted social practice, and as such, scholars seeking to understand how participatory musicking forms Christian community and subjectivity must address an often bewildering array of questions: inquiries into historical transmission and traditioning, processes of mediation, multilayered social dynamics, liturgical contexts, and analyses of lyrics, music, and movement each contribute insights to congregational music’s social and spiritual efficacy.

The numerous questions to be addressed when studying congregational music-making, as well as the increasingly diverse backgrounds of the potential scholarly audiences, create methodological challenges. The past decade has seen efforts within the emerging field of congregational music studies to identify and address these challenges (Ingalls, Landau, and Wagner 2013; Porter 2014; Nekola and Wagner 2015; Ingalls, Swijghuisen-Reigersberg, and Sherinian 2018). In the inaugural volume of the Congregational Music Studies Series, Ingalls, Landau, and Wagner (2013, 10) write that the field aspires to “a multi-voiced dialogue between methodological approaches, disciplinary perspectives and the positioning of scholars in relationship to the communities they represent.” As congregational music studies have expanded beyond what Mark Porter (2014) describes as its “natural homes” within musicology and theology to include contributions from communications studies, ethnomusicology, history, popular music studies, religious studies, and sociology, among other disciplines, it has become increasingly interdisciplinary but also at times increasingly fragmented. In this rich interdisciplinarity, congregational music studies finds its strengths: for example, the field’s theoretical perspectives and research methodologies benefit from researchers’ varied backgrounds and reflect a diverse array of epistemologies and approaches to gathering, interpreting, analyzing, and presenting data. Within the field’s growing body of published research, such intersecting perspectives yield insights into congregational music and praxis that similarly demonstrate the value of enabling (and encouraging) multiple points of entry for intellectual inquiry (see, for example, Ingalls, Landau, and Wagner 2013; Porter 2014; Nekola and Wagner 2015; Porter 2016; Dueck 2017; Ingalls, Swijghuisen-Reigersberg, and Sherinian 2018). And yet, because it is not grounded within a single scholarly discipline, congregational music studies can pose challenges to scholars and scholar-practitioners who enter the field with a set of theoretical and methodological norms and assumptions carried from their home disciplines as they encounter unfamiliar terms, methods, and modes of discourse.

Against this interdisciplinary backdrop, Studying Congregational Music examines key theoretical perspectives and research methodologies within the emerging field of congregational music studies. Though originally conceived following the 2015 “Christian Congregational Music: Local and Global Perspectives Conference,” this book is a product of ten years in the making. Its genesis dates back to the initial steps to build a collective and sustained conversation about Christian musicking out of the many isolated conversa- tions going on in different academic arenas. Though congregational music studies may overlap with the ethnomusicology of Christianity (Engelhardt 2009) and music theology (Zon, this volume), it is not coterminous with either of these. Rather, it is a sustained conversation with growing areas of emphasis and exciting possibilities for a multifaceted scholarly toolbox. We present congregational music studies as a coherent—if complex—area of study and seek to make its variety of available perspectives, methods, and limits more comprehensible to scholars and practitioners alike. Studying Congregational Music is not a prescriptive methodological handbook; rather, it is a guide to help readers think through the challenges of interdisciplinary research on congregational music-making by critically examining the theoretical lenses and methodological toolkits that leading scholars are using to interpret the phenomenon and its communities. Through case studies within individual chapters, contributors also comment upon the potential value of specific literatures, theories, and methods to congregational music studies. Contributors include established and early career scholars from several disciplinary backgrounds, including ethnomusicology, historical musicology, liturgical studies, media studies, music theory, religious studies, sociology, and theology.

Before considering these perspectives, it is valuable to examine more fully the resonances of “congregation,” itself the central term of this emerging conversation. The varying ontologies of the congregation complicate the theoretical and methodological approaches to studying congregational music. Researchers encounter diverse and shifting definitions and theologies of congregation, both within the academic literature and in their research contexts. Extending ecclesiological reconfigurations of congregation to music-making, Ingalls (2018, 5) has proposed a music-centered reconceptualization of the congregation drawing from lived experiences of Christian community as “a fluid, contingent social constellation that is actively performed into being through a set of communal practices. . . . By extension, ‘congregational music-making’ is reconceived as a participatory religious musical practice capable of weaving together a religious community inside and outside institutional churches.” To shift the emphasis of “congregation” from product to a performed process, she (2018, 22) introduces the concept of “musical modes of congregating” to describe “the active creation of various social formations that have gathered for the express purpose of worship.” These musical modes of congregating include but also extend far beyond weekly Christian worship, encompassing home group Bible studies, worship conferences, music festivals, social media, college campus ministries, intentional communities or communes, and many other contexts. For some scholars, to frame a particular community or collective as a “congregation” necessarily enables a reconsideration or redefinition of the latter (see particularly Klomp, this volume). But for all scholars of congregational music, interrogating the congregation is a prerequisite to understanding how to research and analyze congregational music.