PDF Neil Young on Neil Young: Interviews and Encounters (Musicians in Their Own Words) Copyright © 2022 by Arthur Lizie 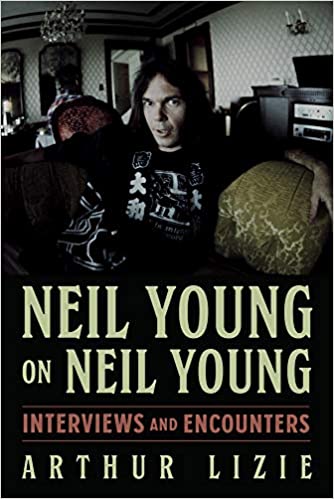 Neil Young on Neil Young: Interviews and Encounters is a revealing anthology of Young’s most significant, fascinating, and entertaining discussions, declarations, and dreams, chronicling fifty years of conversations, feature stories, and press conferences.

With many interviews widely available for the first time—including new transcriptions and first-time translations into English—the book spans Young’s words and ideas from 1967 onward: his early days with Buffalo Springfield and 1970s Harvest-fueled celebrity apex, an artistic rebellion and 1980s commercial dip, and the unexpected 1990s revival as the Godfather of Grunge through to his multi-decade victory lap as a living legend.

Across the decades, Young’s own words tell the story as he perpetually reinvents himself as a master of music and film, a technology pioneer and innovator, and a bold political observer and strident environmental advocate.

Although Chrome Dreams II’s centerpiece, “Ordinary People,” begins with an evocation of Fred Zinnemann’s 1952 Western classic High Noon, it’s a quote from a decade later in John Ford’s The Man Who Shot Liberty Valance that better captures the essence of Neil Young: “When the legend becomes fact, print the legend.” This quote applies not only to the musical stories Young tells, which often traffic in the magical transition between dull fact and golden myth—a point alluded to on 2012’s Americana/Alchemy tour with Crazy Horse—but also in the stories we tell about him.

Perhaps the biggest legend perpetuated about Young is that he doesn’t talk to the press, that he’s a hippie hermit in a hair shirt who barely opens his mouth. As recently as 2018, a major publication promoted a “rare interview” with Young. This “rare” interview was published during a week in which more than half-dozen other publications offered their own “rare” interviews. Print the legend.

What seems true is that Young doesn’t like talking to the press. Unless, that is, he has something he really wants to promote, such as Pono, or LincVolt, or his Archives, or his view on Canadian tar sands, or his latest (don’t call it a) comeback. It’s then that his chat amp goes to eleven. At these times he can be quite generous and, increasingly with age, quite personable.

To be fair, interviews were rarer during the first decade of Young’s career. But, after an initial flourish of minor interviews, he pulled away, suffering shell shock from both his “sudden” fame with CSNY and Harvest and the typical recreational pitfalls of rock-star celebrity. Over the second decade he built back slowly and, after 1985 and Old Ways, it was rare for much time to pass when he wasn’t regularly meeting with the press, always available to promote his new creative project. And to answer the same questions—about Buffalo Springfield and Crosby, Stills, Nash & Young reunions, about Trans, about supporting Reagan, about cerebral palsy, about the Archives, about audio technology—over and over again (to coin a phrase).

But this seeming contradiction is part of what makes telling the Neil Young story so difficult—or rather, so much fun: he’s a study in opposites. He is the infrequent interviewee who can’t stop talking to reporters. He’s the sensitive acoustic guy who can make your ears bleed. He’s the counterculture hero who supported Reagan. He’s the leave-the-bad-notes-in guy who’ll talk your ear off about digital audio bitrates. He’s the ordinary dude you’d smoke weed with who dated Hollywood actresses. Back and forth: he is the ocean.

Another legend we tell about Young concerns his fierce individualism. While there is no denying he has always pretty much done what he’s wanted, and you’d be hard pressed to say he’s not his own person, he doesn’t always do what he does on his own. He’s not only The Loner, but also The Leaner, resting against a vibrant network of creative support. From the Mynah Birds to Buffalo Springfield to Crosby, Stills & Nash and countless backing bands, including the Stray Gators, Promise of the Real, and, of course, Crazy Horse, Young has more often than not relied on other musicians to help make his music. And this spreads beyond guys with instruments (let’s face it, he mainly works with guys) to other collaborators, such as producer David Briggs, manager Elliot Roberts, engineer John Hanlon, and directors Jim Jarmusch and Jonathan Demme. And, in this volume, cointerviews with R.E.M.’s Peter Buck and producer Daniel Lanois. Another contradiction.

That being said, this volume avoids group interviews: too little Neil Young is covered in too many words. This is particularly true of CSNY interviews, which are their own beast and well collected in Dave Zimmer’s 4 Way Street reader. Likewise, while Rolling Stone was a major early Young supporter, the magazine’s 1994 compendium ably covers that material.

But this is about all the sense I want to make of Neil Young in this introduction. The point is to let Young’s own words tell his story. To that end, the chronological chapters—culled from press conferences, magazines, radio appearances, and online interviews, from sources famed, fleeting, and forgotten—were selected with an eye toward both telling the overall Neil Young story and illuminating key events, ideally with little repetition from chapter to chapter (although some creeps in—sorry). Each chapter includes a brief contextualizing introduction, especially important at times when there’s a big gap between years. Let’s roll: here we are in the years.