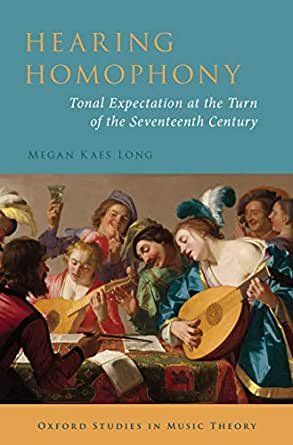 The question of tonality's origins in music's pitch content has long vexed many scholars of music theory. However, tonality is not ultimately defined by pitch alone, but rather by pitch's interaction with elements like rhythm, meter, phrase structure, and form. Hearing Homophony investigates the elusive early history of tonality by examining a constellation of late-Renaissance popular songs which flourished throughout Western Europe at the turn of the seventeenth century. Megan Kaes Long argues that it is in these songs, rather than in more ambitious secular and sacred works, that the foundations of eighteenth century style are found. Arguing that tonality emerges from features of modal counterpoint - in particular, the rhythmic, phrase structural, and formal processes that govern it - and drawing on the arguments of theorists such as Dahlhaus, Powers, and Barnett, she asserts that modality and tonality are different in kind and not mutually exclusive.

Using several hundred homophonic partsongs from Italy, Germany, England, and France, Long addresses a historical question of critical importance to music theory, musicology, and music performance. Hearing Homophony presents not only a new model of tonality's origins, but also a more comprehensive understanding of what tonality is, providing novel insight into the challenging world of seventeenth-century music.

Writing this book has been one of the great privileges and pleasures of my life. This undertaking would not have been possible without the support of innumerable people and institutions, to whom I owe profound gratitude. The seeds of this project were planted during my graduate study at Yale University, where I was fortunate enough to be advised by Daniel Harrison. His curiosity and eclecticism are constant sources of inspiration, and his mentorship and goodwill carried me through graduate school and have buoyed me through every stage of writing this book. Ian Quinn has advocated for this book from the beginning, and his insights have shaped the very foundations of my thinking about tonality. I am grateful, also, to Richard Cohn, Patrick McCreless, and Robert Holzer for their mentorship and continued investment in my work. And, for setting me on a trajectory that has led me to the curious and delightful world of music theory, I am grateful to my mentors at Pomona College: Alfred Cramer, Joti Rockwell, and Donna Di Grazia.

The project was little more than the spark of an idea when Steven Rings first suggested that it might be a good fit for Oxford Studies in Music Theory. His interest gave me the push I needed to develop Hearing Homophony into a book, and his support along the way has been invaluable. I am grateful also to Dmitri Tymoczko and the two anonymous reviewers, whose critical feedback strengthened my ideas and helped me hone the book’s structure and tone. Brian Alegant, Christopher Brody, Daniel Harrison, and Ian Quinn each read portions of the manuscript and helped me refine my thinking and writing.

I am grateful to the National Endowment for the Humanities for a Summer Stipend grant that facilitated several weeks of archival research in the early stages of developing this project. Oberlin College has also provided me with generous support in the form of a Research Status Grant, an H. H. Powers Grant, and two grants-in-aid; in particular, Oberlin’s provision of time, in the form of a year-long sabbatical, gave me the opportunity to think deeply and write slowly. Several individuals helped me to put the finishing touches on the book. Nate Mitchell prepared the book’s musical examples with tireless attention to detail. An ensemble of talented musicians, Elena Mullins, Melanie Emig, Joseph Schlesinger, Evan Bescan, Brian MacGilvray, and Brian Kay, gamely recorded the musical examples in two marathon days. Gregory Ristow was instrumental to this process—he masterfully organized and produced the recordings, and sang on several of the tracks as well. Christ Episcopal Church in Oberlin made their space available to us for recording.

An earlier version of part of Chapter 5 originally appeared as “Characteristic Tonality in the Balletti of Gastoldi, Morley, and Hassler,” Journal of Music Theory 59, no. 2 (2015): 235–271. It is adapted here with permission.

So many individuals have generously supported this project in ways large and small. I am grateful to Thomas Christensen, Michael Dodds, Jessie Ann Owens, Ian Quinn, Paul Schleuse, and Dmitri Tymoczko for providing me with prepublication copies of their forthcoming work or work in progress. The Early Music Analysis Interest Group of the Society for Music Theory has been a great source of support and encouragement over the past several years, and I am particularly grateful to Kyle Adams and Gregory Barnett for their friendship and insight. Tessie Prakas, Christoph Schlechter, and Julia Doe generously hosted me on my international travels and helped me navigate unfamiliar libraries.

The Oberlin College Conservatory of Music has been my rich intellectual home since 2014. I am thankful for my inventive colleagues in the Music Theory Division and the broader Oberlin community. For helping me develop ideas, I am grateful especially to Ben Geyer, Will Mason, Jan Miyake, Arnie Cox, Rebecca Leydon, Bryan Parkhurst, Allen Cadwallader, James O’Leary, Steven Plank, and Gregory Ristow. And my sincere thanks are due to Jeanne Rosecrans, our tireless administrator, who has helped me in more ways than I can count.

I couldn’t have written a single word of this book without my dear friends Christopher White, Christopher Brody, Alexandra Kieffer, and Julia Doe. Our frequent conversations and daily text messages helped me hash out my broadest methodological questions as well as the smallest details of wording and typography. I never once felt alone while writing this book because of their friendship and encouragement. I am grateful, also, to my larger intellectual community, especially Eden McLean, Tessie Prakas, Amy Dunagin, and Lisa Crawford, for inspiring me with their relentless pursuit of excellence.

Finally, thank you to my family. My parents, Jeff and Lori Kaes, fostered my passion for music from an early age and continue to be my most ardent supporters. And I extend my deepest and most profound gratitude to my husband, Sylvan Long. His patience, generosity, and enthusiasm made this book possible.