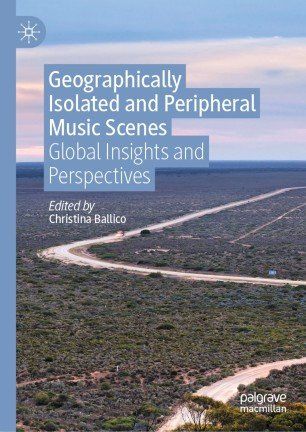 Music is intrinsically linked to place. All musicians emerge from some- where—whether it be the music scene in their hometown, or those which exist in virtual spaces. In turn, as a cultural expression, music contributes strongly to the social production of places, illuminating various elements of place through iconography, heightened perceptions of a particular locale, and/or through lyrics (Cohen, 2017; Connell & Gibson, 2003; Scott, 1997). Owing to a combination of the scale and approaches to music production and dissemination, particular cities may be favoured as those in which musicians desire to live or work in—either permanently or temporarily—in order to established one’s career, or to undertake particular creative and business activities (Johansson & Bell, 2012). Given this multifaceted relationship between music and place, specific place-based music scenes have contributed strongly to contem- porary music culture in the past 60 years, with those emerging from geographically isolated and peripheral locales, being especially impactful. Music from the cities of Seattle, in the United States (US) , (Grunge), Liverpool (Merseybeat) and Manchester (Madchester), in the United Kingdom (UK), for example, made significant contributions to global contemporary popular music culture between the 1960s and 1990s, the ramifications of which we still see in today’s contemporary music industries. What makes these scenes significant is not only tied to the continuing impact of the artists who emerged from such centres—these cities were not likely to gain interest beyond their home locales: their disconnect from larger music hubs and networks of activity—such as Los Angeles and New York in the US, and London in the UK, respectively—meant they were not considered to be worthy of national, let alone international, attention. As such, it was not uncommon for bands to leave these cities in order to continue developing their careers, and for these cities to also be excluded from national and international live touring circuits.

A shift towards such geographically isolated and peripheral scenes as being worthy of mainstream attention required a combination of attitudinal change, technological advancements, and an ultimate reconfiguration of global contemporary music culture. In recent years, this reconfiguration has also seen historically marginalised, and otherwise regionally contained genres of music—such as K-Pop (Korean Pop) and J-Pop (Japanese Pop)—gain popularity within mainstream global music markets. Even more recently, the COVID-19 coronavirus pandemic has reconfigured global contemporary music culture due to its impact on mobility. No longer are we able to move within and between our cities, our states, and our nations the same way we once could. To this end, all place-based music industries and scenes are grappling with varying degrees of isolation, the impacts of which result in a combination of benefits and challenges. On the one hand, removal from core networks of activity, resources, and expertise supports unique and innovative approaches to creative practice, modes of learning, the development of support mechanisms, and the development of locally focused resources. On the other hand, the geographical distance results in increased investments of time and money, with the removal from these centres also resulting in negative perceptions about the validity of creative and cultural outputs which emerge. This tension—between the benefits and challenges of working within and from geographically isolated and peripheral music industries and scenes—has undeniable consequences for the ways in which they function, and for the resulting experiences of musicians, industry practitioners, and audiences alike. This collection explores such tensions within the context of music’s relationship to place across case studies from a diverse range of geographical locations: Australia, Canada, Chile, the Faroe Islands, Iceland, Ireland, Papua New Guinea, and the United States.

Well established across a range of music scenes and creative geographies literature, our understanding of music’s relationship to, and with, the place is multifaceted. This ranges from the ways in which music and associated activities occur within place-specific contexts, on the influence of the built and natural environments on lyrics and associated iconography and, on the experiences of musicians and industry practitioners working within and from particular geographical locales (Cohen, 2017; Connell & Gibson, 2003; Hracs, 2010; Hracs & Leslie, 2014; Hracs et al., 2011; Stahl, 2014; Brunt & Stahl, 2018). Music’s role in creative cities paradigms and its capacity for economic development within cities is also recognised, while emergent research considers the ways in which place-specific music scenes and tourism practices can be leveraged as part of a city’s creative and cultural identity across a range of heritage and place activation strategies, which in more pronounced iter- ations has come to be known as the ‘music cities’ movement (Ballico & Watson, 2020; Homan et al., 2013; Loftsgaarden, 2018; Seman, 2010, 2015; Terrill et al., 2015). In turn, much work has been undertaken in order to understand the relationship between specific music activities, and the city. Live music performance, for example, sits firmly within broader entertainment and hospitality activities, while being influenced by a range of regulatory practices which govern the structure and func- tioning of nightlife economies and broader urban governance practices (Ballico, 2021; Ballico & Carter, 2018; Chatterton, 2002; Chatterton & Hollands, 2002; Demant & Landolt, 2014; Lovatt & O’Connor, 1995; Talbot, 2011). At the heart of much of this scholarship is the notion of what constitutes a music ‘scene’ and the resources needed to facilitate their functioning and success which can reveal much about the realities of establishing and sustaining such sites of creativity and practice within place-specific contexts (Johansson & Bell, 2012; Shank, 2012; Straw, 1991). Arguably, and as reflected across such literature, all place-based music industries and scenes operate, to some degree in a similar manner. As is the focus here, however, geographical isolation impacts and influences the ways in which scenes in such locales operate locally and beyond their locales. Furthermore, when considering the ways in which music activities occur within such locales, considering the additional elements of perceptual and operational peripherality can offer additional insights into the attitudinal barriers which can further compound the logis- tical, financial, and temporal complications resulting from geographical isolation (Walters & Jepson, 2019).

As is explored across this collection, isolation and/or peripherality can result from a combination of the distances and/or inhabitable terrain within and between centres of activity, the historical attitudes, and perceptions towards the validity of the creative and cultural outputs which emerge from such locales, and from language barriers present within and beyond particular sites of activity. The impact of geographical isolation is manyfold: it requires high investments of time and money to overcome, while influencing the scale and scope of the resources and associated activities available within localised sectors. Furthermore, it influences the mobility—that is the fluid, short-term, multidirectional movements, and interactions—of musicians, industry practitioners, and resources, alike (Duester, 2014). In turn, particular activities, resources, and approaches to creative and business decision-making practices may be favoured due to their capacity to offset the barriers resulting from geographical isolation.

Despite these challenges, such spaces are also sites of dynamic modes of learning, camaraderie, and support among members as well as locally developed and sustained resources which support a range of music and music-related activities and operate beyond the pressures of commer- cial expectation and success indicators. In turn, geographically isolated and peripheral locales can also provide creative workers—such as musicians—the opportunity to create outside of commercial pressures and influences. Significantly, however, the impacts of isolation and peripherality remain—albeit to varying degrees—despite the proliferation of digital technologies such as the internet and associated platforms which support the creation, distribution, and promotion of music (Hracs, 2012; Hracs et al., 2016; Wikström, 2020). This is because activities associated with this technology—such as connecting with fans via social media—not only result in new forms of labour for musicians, but do not always translate into increased revenue nor recognition, a matter compli- cated by the platforms’ algorithms and organisation of their content (Arriagada & Lavín, this collection). In addition, despite the prolifera- tion of the internet and associated digital technologies globally, access issues still remain in places where network and/or internet technologies are lacking (Brown, this collection).

Considering the multifaceted impacts and influences of geograph- ical isolation and peripherality, this collection brings together nine case studies which explore the experiences of working within and from music industries and scenes which can broadly be defined as such. Written by scholars working across the fields of cultural studies, linguistics, media studies, music studies, and social media studies, diverse perspectives from locations such as Australia, Canada, Chile, the Faroe Islands, Iceland, Ireland, Papua New Guinea, and the United States are presented. These case studies explore and highlight the spectrum of benefits and challenges associated with working within and from geographically isolated and peripheral locales. In doing so, they discuss the range of place and site-specific activities and resources which exemplify the highly nuanced influences and impacts of working on and at the periphery. As is also explored, perceptions relating to the legitimacy of musical outputs from such centres, not only leads to acts of erasure in the histories of the artists who emerge from these sites, but also results in a lack of outside engagement with their local scenes due to the perceptions of viability as music markets from which noteworthy artists can emerge (Ballico, this collection; Flynn, this collection). In turn, such issues reveal the importance and usefulness of support arts funding and regulatory measures to assist with overcoming attitudinal and logistical barriers associated with geographical isolation and peripherality.
Нажмите, чтобы прочитать больше...