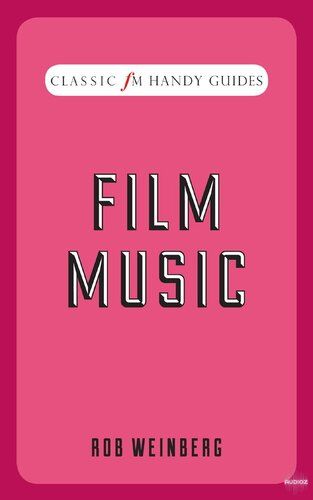 Film music is an increasingly popular part of the classical music repertoire, with a huge range of beautiful, dramatic and well-loved film scores coming out of Hollywood, from Star Wars to Up. From the early days of silent cinema through Hollywood's Golden Age and up to the modern-day blockbusters, this handy reference guide from Classic FM showcases some of the greatest composers of film scores, along with plenty of suggestions for musical delights ready to be discovered. Classical music plays a key role in film soundtracks, creating iconic moments and bringing classic tracks to a wide audience, from 2001: A Space Odyssey to Apocalypse Now. Packed full of essential information, this pocket-sized handbook explores the history of film music, the development of different styles, award-winning composers and the most popular pieces within the genre. Classic FM's Handy Guides are a fun and informative set of introductions to standout subjects within classical music, each of which can be read and digested in one sitting: a perfect collectible series whether you're new to the world of classical music or an aficionado.

At Classic FM, we spend a lot of our time dreaming up wonderful ways of making sure that as many people as possible across the UK have the opportunity to listen to classical music. As the nation’s biggest classical music radio station, we feel that we have a responsibility to share the world’s greatest music as widely as we can.

Over the years, we have written a variety of classical music books in all sorts of shapes and sizes. But we have never put together a series of books quite like this.

This set of books covers a whole range of aspects of classical music. They are all written in Classic FM’s friendly, accessible style and you can rest assured that they are packed full of facts about classical music. Read separately, each book gives you a handy snapshot of a particular subject area. Added together, the series combines to oer a more detailed insight into the full story of classical music. Along the way, we shall be paying particular attention to some of the key composers whose music we play most often on the radio station, as well as examining many of classical music’s subgenres.

These books are relatively small in size, so they are not going to be encyclopedic in their level of detail; there are other books out there that do that much better than we could ever hope to. Instead, they are intended to be enjoyable introductory guides that will be particularly useful to listeners who are beginning their voyage of discovery through the rich and exciting world of classical music. Drawing on the research we have undertaken for many of our previous Classic FM books, they concentrate on information rather than theory because we want to make this series of books attractive and inviting to readers who are not necessarily familiar with the more complex aspects of musicology.

For more information on this series, take a look at our website: www.ClassicFM.com/handyguides.

If you’ve just picked this book up in a shop – or even already bought it – you’ve probably realised by now that we’re on a journey to nd out more about lm music.

Since Classic FM’s launch in 1992, we have always enjoyed making links between classical music and the movies. The rst contact many of us had with the great classics – barring television commercials for Hovis or Nescafé – was when Mickey Mouse struggled to tame his wayward brooms in Fantasia’s ‘The Sorcerer’s Apprentice’ sequence.

Or perhaps your rst encounter with the music of Richard Wagner took place while his Ride of the Valkyries boomed out of Chinook helicopters thundering over Vietnam in Apocalypse Now?

With the invention of motion pictures, it was only to be expected that music would play a major role in accompanying the telling of stories on screen. Film was the natural evolution of the kind of storytelling for the masses pioneered by the great composers, through their operas, incidental music for theatre, and songs.

Over the past hundred years, while so-called ‘serious’ composers often shunned melody, beauty and harmony in their music, lm composers created some of the most melodic, dramatic and inspirational orchestral music ever written. All of them were equally serious about their craft, many of them classically trained and trying to earn a living while often continuing to write for the concert hall. Many classical composers, beginning with Camille Saint-Saëns and coming up to date with Philip Glass, have created music for the big screen. Indeed it is entirely plausible to think that had Beethoven or Mozart been living in our time they would have enthusiastically embraced composing for the cinema, as they did for the theatre in their own day, and would probably be scoring video games as well, a genre in which a number of today’s most successful lm composers have cut their teeth.

Classic FM proudly showcases lm music every day in its shows, specically Saturday Night at the Movies every weekend, featuring the greatest scores, exciting new releases and the world’s favourite classical pieces as heard in the movies.
For a genre that is just one century old, it is remarkable that so many lm themes have rapidly become loved the world over, with a life of their own outside the cinema – in the concert hall and on albums. The majority of music lovers would not hesitate to call the themes to Schindler’s List or Lawrence of Arabia classics.

So we shall make no apology to the classical purists for giving lm music the credit and exposure it deserves. It not only contributes to a great experience at the cinema – boosting the excitement and enhancing emotions – but also opens the world of great orchestral and choral music to the biggest imaginable audience.
Нажмите, чтобы прочитать больше...