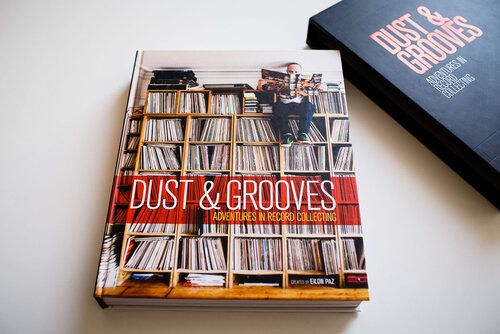 Make no mistake—I love music and I love vinyl, but Dust & Grooves wasn’t born out of a personal obsession with records.

I’ve never had a want list, nor have I ever paid much attention to the distinction between VG+ and M-, or sought out limited editions, one-off pressings, or acetates. My passion lies with music, photography, and, as I discovered, photographing those with an unshakable devotion to collecting records. Through Dust & Grooves, I’ve been able to meet over 150 of the world’s most fervent collectors, photograph their prized collections, and ultimately connect to a world that has always been dear to me.

Like nearly every single person profiled in this book, I grew up in a household filled with music. My parents’ collection of Argentine folk (Mercedes Sosa), tango (Carlos Gardel), and Pink Floyd LPs would be regular fixtures on the family turntable. I later discovered jazz via ECM Records and jazz-funk artists like Ramsey Lewis and Jimmy Smith, and have since accumulated a small but satisfying collection of records. Pink Floyd’s Animals has been a longtime favorite, as much for the music as for the striking cover art. It was actually the dark, surreal mood of the cover photo that fueled my desire to pursue photography. I spent a good chunk of my twenties and thirties making a living as a photographer in my home of Tel Aviv, Israel, mostly covering food and travel, but also working with record labels and artists. I enjoyed the work, but I always had the nagging feeling that I wanted to embark on my own music photography project— something more personal, more creative, more inspiring.

In the summer of 2008, I left the comforts of my friends and family in Israel and moved to New York City. Of course, I didn’t pick the ideal time—the recession was about to sweep through the city and take all the jobs with it. Being unemployed sucked, but it also left me with a lot of time to spend in record stores. Back then, the vinyl resurgence was in its early stages, and records were cheaper and much more plentiful in New York than in Israel. A couple of months after I arrived in NYC, a friend emailed me an unforgettable photo of a man in combat boots, holding an AK-47 machine gun, surrounded by masses of records. I was completely captivated by this exotic, intriguing image, and it somehow ignited my creative calling—to photograph record collectors. I read on to discover that the man was Frank Gossner, a German record collector who regularly travels to West Africa to dig for records. It turned out Frank was living in Brooklyn, and he was game to meet me for coffee.

When I told Frank about my idea to photograph the New York crate-digging scene, he went to the trouble of introducing me to some of the city’s major vinyl-heads, including Joel Oliveira, once owner of the now-shuttered East Village record store Tropicalia in Furs. Joel welcomed me into his shop, and we spent the day talking about his Brazilian mainstays, rare Japanese Beatles pressings, and the “Crazy World” section of his shop—where X-rated LPs sat next to recordings by Pope John Paul II. Although this was officially my first interview, I didn’t have any grand aspirations for this project yet—it was simply for my personal enjoyment, not for the public. It took one more step for the true nature of Dust & Grooves to come into focus.

Backtracking to 2005—during a brief visit to NYC, I saw DJ Cosmo Baker spinning this gritty, raw funk set at a Sharon Jones album launch party in Brooklyn. He completely blew my mind, and I asked if I could shoot him for a photo spread about the funk revival scene. The shoot never panned out, but when I contacted him a few years later to request an interview for my new project, he happily obliged. He invited me to his home in Brooklyn, where I photographed him amongst the endless shelves of vinyl in his record room. And that’s when everything clicked. In the comfort of the home—without any professional lighting or other people around—I watched my subject open up. My experience with Cosmo that day was truly up close and personal—a photographer’s dream. And that’s when I realized that I needed to share these photos with the world.

I started posting the photos and long, conversational Q&As online, and it quickly became apparent that there was a large community out there who identified with these pieces. I’d seen features on DJs’ record rooms before, but few articles had really dug into people’s personal collections in such an intimate way. Just through word of mouth, my blog’s readership grew, and I felt like I was tapping into a hidden scene I never knew existed. While trying to earn a living as a freelance photographer, I continued working on the blog and started purposefully working layovers into my trips—in Paris, Istanbul, London—to track down collectors from outside the United States. As I began to interview more and more people, I found we had something in common—when they dig and make a new discovery, their desire to dig grows. In a similar way, one interesting interview prompted me to dig for another and then another.

The backing of the vinyl community was another major driving force. I absolutely wouldn’t have taken the project this far if it hadn’t been for the enthusiasm of so many devoted collectors who rated my work and bothered to tell me so. They made it clear that this was more than just a fun project— it was meaningful to people. In the beginning, I’d sometimes let the blog slide and not post for a few months, but readers started to nudge me if they saw it neglected. I realized I had a responsibility to the growing Dust & Grooves community to keep the stories coming.

Another turning point came in 2011 when King Britt—whose records I had loved and spun as an amateur DJ in Tel Aviv—sent word, giving his thumbs-up to the blog and expressing interest in being profiled. That was, to put it mildly, a nice pat on the back. That King believed I was doing something worthy reinforced my faith in karma; it showed me firsthand the power of doing what you love, sticking with it, and believing that it will someday pay off—maybe in a way you wouldn’t have expected. It was King who suggested I publish a Dust & Grooves book. The vote of confidence was hugely appreciated, but I didn’t feel quite ready to take on such a daunting job, and I must confess, I preferred to keep the blog small, without having to commit to anything bigger. I wanted to keep it easy. But in the back of my mind, I knew that if I wanted to make something great, it probably wouldn’t be easy.

I had almost forgotten about the book idea until I found myself messing around with a few 5x7 photo prints in my studio one afternoon. When I saw the images in the flesh, laid out side by side, it struck me: of course this should be a book.

The pictures had come to life on paper. From that point on, Dust & Grooves took over my life.

In 2012, I launched a Kickstarter campaign to fund the production of the book, which ended up reaching its goal with over six hundred backers. The financial support gave the project a major boost, but it was the truly spiritual experience of receiving so much love and commitment from people who didn’t even know me that made the most profound difference.

I’ve come to think that there’s something really pure and primal about collecting vinyl, and about the people who do it. It’s the reason why I have been so adamant about sticking to vinyl collectors only, and have avoided cassette tape addicts and CD hoarders. Having a record collection in this digital-dominant climate is a very particular thing. It’s a pain in the ass, frankly. It’s not convenient, it’s not necessary, and it makes little sense. I ask myself why I keep buying records. I move a lot, and records weren’t built for dragging around the world. But even in this digital age, we humans still love to have objects, we love to have stuff—it’s comforting. Music is comforting. And at the intersection of these timeless human comforts, we find this beautiful obsession called record collecting.

Playing vinyl is also a way to nourish and grow our passions. When we have to get up and flip the record, when we have to move boxes of 12-inches, keep them clean, and go digging for the ones we want, we’re making everything a little harder on ourselves. It’s a mental and a physical workout. It’s acknowledging the importance of music and beauty in our lives, acknowledging that they can and should demand our attention. And it’s a more rewarding experience when we know we’ve worked a little harder to get there.

Also, for me personally, getting to know collectors is a way to practice seeing without judgment. I’ve now met collectors from all walks of life: retired truck drivers, urban DJs, socialites, recluses, parents, punks, people who brag about their collections, people who are secretive. One guy buys records just so he can give them away, while another keeps them locked down in his basement. Most of the collectors I’ve met are male; most of them own cats; almost all of them have phenomenal memories, are naturally curious, and are possibly a little OCD. I don’t even try to understand it all! I just notice and appreciate what makes each person unique, and use my camera to capture this passionate pursuit that links them all together. It feels to me as though music is an unspoken religion and the records are its texts. Two people who live thousands of miles apart and have never met will both cite Stevie Wonder or Curtis Mayfield albums among their comfort records, and it fills me with joy to see this. It illustrates how people are basically united, how we all have invisible threads connecting us. It allows me to drop my cynicism and feel naive again.

Since this project began, I’ve experienced both highs and lows. Dust & Grooves has been the optimal cure for the loneliness that accompanies being a newcomer in a big city, and it has given me the kind of motivation I never would have felt had I remained at home in Israel. But amidst all the positivity, there have been moments when I’ve felt very sad for people, and I’ve encountered times of major stress, awkwardness, and tension. I’ve made a few true friends through this project, and have lost a few as well.

Dust & Grooves has introduced me to scores of tremendous people who’ve given their time and energy to seeing this project succeed—collectors, of course, but also opinionated readers, anonymous donors, and people who have just walked up to me, introduced themselves, and said they wanted to help. This community mentored me, encouraged me creatively, improved my writing, and got me collaborating with wonderful, creative people. They have made the whole project bigger and better.

All together, and only together, we’ve made Dust & Grooves happen.
Нажмите, чтобы прочитать больше...