PDF Book Reports: A Music Critic on His First Love, Which Was Reading Volume © 2019 Robert Christgau 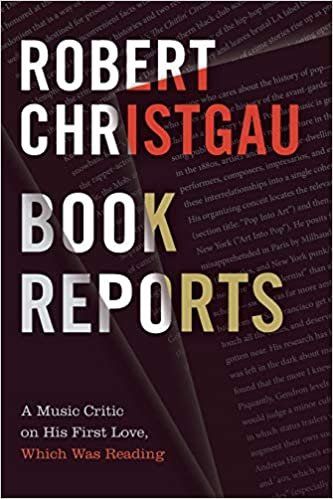 In this generous collection of book reviews and literary essays, legendary Village Voice rock critic Robert Christgau showcases the passion that made him a critic-his love for the written word. Many selections address music, from blackface minstrelsy to punk and hip-hop, artists from Lead Belly to Patti Smith, and fellow critics from Ellen Willis and Lester Bangs to Nelson George and Jessica Hopper. But Book Reports also teases out the popular in the Bible and 1984 as well as pornography and science fiction, and analyzes at length the cultural theory of Raymond Williams, the detective novels of Walter Mosley, the history of bohemia, and the 2008 financial crisis. It establishes Christgau as not just the Dean of American Rock Critics, but one of America's most insightful cultural critics as well.

These 80 reviews and essays date back to 1970, so long ago I often can’t remember who edited them. But I thank every- one who did. Post 1980, my memory improves, with three enablers earning their own sentences. M. Mark, the onetime copy chief I’d asked to be my Village Voice editor even before she conceived the Voice Literary Supplement, oversaw selections as evanescent as “15 Minutes of . . .” and as mas- sive as “Living in a Material World,” neither of which anyone else would have published. At the Los Angeles Times, Steve Wasserman steered me to life-changing books by Dave Hickey and Ned Sublette as well as many merely excellent ones. And in the ‘10s Barnes & Noble Review’s Bill Tipper nurtured my every enthusiasm as he oversaw a quarter of this collection. Nor have I forgotten Michael Anderson wel- coming me to the nytbr, Adam Shatz letting me go long at The Nation, Voice editors Scott Malcomson, Michael Miller, and Joy Press picking up where M. left off, former Voice music editors Eric Weisbard and Ann Powers overseeing a pop conference where Henry Pleasants and Charlie Gillett fit right in, or Voice editor Ed Park alerting The Believer to a minstrelsy overview the journal that convinced me to write it gratis decided was over its readers’ heads. Thanks as well to my old friend Greil Marcus for enthusiastically supporting this project and my rabbi without portfolio Joe Levy for ongoing conceptual and promotional suasion as well as last-lap editing. Warmest ongoing thanks to my dear friend and forebearing agent Sarah Lazin and her editorial assistant extraordinaire Margaret Shultz, who pitched in on more details than I have the heart or humility to enumerate. At Duke University Press, Sara Leone and Stephanie Gomez Menzies oversaw production and Laura Sell, Chad Royal, and Jennifer Schaper kept spreading the news. But my deepest thanks there go to Ken Wissoker, who decided that I had not one collection to write for Duke—that would be 2017’s Is Is Still
Good to Ya?—but two.

Have I forgotten anybody? Of course not, just saved her for last. Adoring gratitude to my wife, Carola Dibbell, who improved the manuscript discreetly from “The Informer” to “My Friend Marshall” and kept thinking about it when she had far more urgent matters on her mind. It’s my dearest hope that I can return the favor sooner rather than later, and my nagging regret that I didn’t scare up the chutzpah to devote a chapter here to her novel, The Only Ones, a cult hit I know very well indeed.

I learned to read first week of first grade and never looked back. By age seven I was reading everything I could get my eyes on, with a major in baseball journalism and a minor in ladies-magazine fiction. But soon I loved books even more, meaning the youth classics and middlebrow bestsellers a culturally aspirational lower-middle-class family had around the house (plus baseball novels from the holy Queensborough Public Library). In high school, rock and roll slowed me down some, but only some—the Bantam Grapes of Wrath I read on the 7 train to my college interview so impressed my designated alumnus it helped get me into Dartmouth. And there I quickly decided that I wanted to be a writer rather than a lawyer and dove into Literature with a capital L: all-lit all-the-time coursework augmented with moderns in the summertime, when I cheated on my parkie hours to lap up U.S.A. and try to love Steppenwolf. I kept three or four books in my backpack as I hitchhiked the country in 1963—a novel or two, some American studies theory, and my complete Yeats. And in 1964, while somehow managing to spend less than I took home at a Chicago encyclopedia company as I failed to write a decent short story or get through The Charterhouse of Parma in French, I discovered the journalism collection, which changed my life as much as English 2.

First came a fifty-cent Pocket Book called The Best of Red Smith, a sports- writing generalist whose casual lucidity, calm morality, and unassuming punch lines I’d been drawn to young by my baseball major. But thanks to Hemingway and Mailer, I was also interested in boxing, so I picked up a Grove paperback called The Sweet Science, where New Yorker press-foodpugilism critic A. J. Liebling quickly surpassed Hemingway and Mailer as a role model. Think about it—why shouldn’t the path to rock criticism lead through sportswriting? Sportswriting celebrates popular pleasures and re- wards colloquial color; the symbolic events it details gain resonance in a telling that’s most telling when it exploits veins of vernacular unavailable to hard-news hardnoses and back-of-the-book art arbiters as well as most litterateurs. And before long journalism collections by Pauline Kael, Tom Wolfe, and Susan Sontag were excavating such notions with more intellectual force than Liebling had the stomach for.

Sontag’s Against Interpretation explicated thinkers of daunting complexity with humbling clarity and then flipped the switch by climaxing with not only “Notes on Camp,” written for the Partisan Review, but “One Culture and the New Sensibility,” initially published in none other than Mademoiselle. Enlightening young women who envied her haircut as well as her iq, Sontag postulated not only that the “crudely put” C. P. Snow distinction between “literary-artistic” and “scientific” cultures was “plainly unwarranted,” and that the “most interesting and creative art of our time is not open to the generally educated” (who I didn’t then see might include me), but that “the affection many younger artists felt for the popular arts wasn’t a new philistinism,” because what Sontag declined to call pop was “a new, more open way of looking at the world”—although never (ever) did she articulate exactly what the name-checked Beatles, Supremes, and Dionne Warwick saw when they looked. Her opposite number was Wolfe, whose The Kandy Kolored Tangerine-Flake Streamline Baby delivered hi-res reports on pop exotica like stock car racing, Phil Spector, and Cassius Clay as well as tonier arcana like a MoMA opening and an ad man visiting his son on Avenue B, all translated into wild-style rhetoric whose excitable pizzazz and overstated punctuation were as inspirational as his content.

The earliest of these three books, however, proved the best and most influential: I Lost It at the Movies. Not yet at The New Yorker when it was published in 1965, Pauline Kael was deeply into movies for love alone. I met her once at the Algonquin and didn’t dig her queen bee act. But her secular intellect and honed prose, her brassy candor and democratic gusto, her nose for the laugh line and love affair with American English, her ideas as juicy as her descriptions, and her enthusiasm for artworks from The Grand Illusion to The Sugarland Express all rendered her an earthshaking critic. And except for Raising Kane, initially a very long New Yorker essay, every one of the dozen-plus books she published was a collection. I’m no Kael—nobody is. But I’ve always figured that if collections were good enough for her, they’re good enough for me.
Нажмите, чтобы прочитать больше...