PDF An Encyclopedia of the Violin Copyright © 2008 by Dover Publications, Inc. 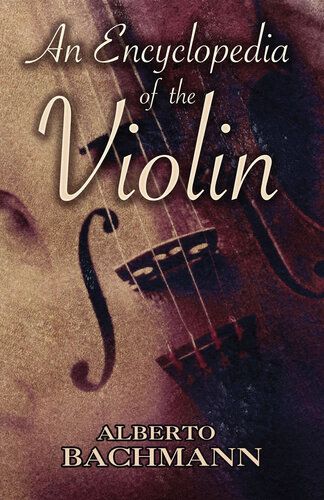 Alberto Bachmann’s first contribution to the literature of music was a work biographical and æsthetic in character: in it the lives of virtuosos, ancient and modern, were portrayed and their works analyzed. This volume, interesting from every point of view, clearly established the varying degrees of talent or genius of all the virtuoso composers from the 16th century to the present day. It was the more valuable since the author was an excellent artist himself, and consequently thoroughly at home in the subjects he discussed.

Having completed this work, in which the conclusions are well reached, and in which the critical comment is both intelligent and respectful, Mr. Bachmann did not feel, however, that he had exhausted his subject, for in this new book, whose sponsor I consider it an honor to be, the author has undertaken one of the most arduous tasks imaginable, that of presenting the violin and the art of violin playing from every possible angle, in a thoroughly exhaustive manner.

In the archives of literature relating to the violin, there would seem to be a gap which this new work will fill. Artists and amateurs alike will find it a kind of universal encyclopedia of the art of the violin, and the scope of the volume itself makes clear how vast this art-field really is, with its diverse elements and its abundance of forms and formulas. I feel that I do not prophesy too freely in predicting that it will meet with a cordial reception.

To write of the violin in a general way is an easy enough matter; to analyze, point by point, detail by detail, all the elements which constitute the virtuoso’s art, is a far greater task. Only an author who knows the instrument perfectly can successfully undertake it.

The violin has its secrets: it has at one and the same time a soul and a mind. It is a poet whose enigmatic nature may only be divined by the elect. It is an instrument whose voice, since first it came into being, has stirred the heart-strings of the human race; and the lofty raptures which it has called forth have done their part, with other branches of the art of music, to raise the soul of man to the highest summits of the ideal.

This volume, in reality, needs no recommendation to the violinist who has once opened its covers, for its value will immediately become apparent, awakening interest which will increase with the turning of every page.

I heartily felicitate the author and remain his admirer.

While literature relating to the violin has been far from meager, there has never been projected, within the knowledge of the author, an encyclopedia covering adequately the matters of historical, mechanical, technical, critical and biographical importance which have profound interest for teachers, students and lovers of the “King of Instruments.”

In endeavoring to produce such a comprehensive work in my Encyclopedia of the Violin, I have based my labors on personal experience, and upon that of the numerous famous violinists with whom I have lived on a footing of friendship and intimacy ; while in transcribing my thoughts I have been careful to bear in mind that clearness and exactness are essential, in view of the marked difference between “feeling” and “expression” in the elucidation of æsthetic matters.

Were a work of this character to attempt to cover at length all the numerous subjects of vital interest, it would of necessity become a publication of many volumes. I have deemed it wiser to treat each topic with clarity and brevity, rather than exhaustively from the scholastic point of view, thus rendering it possible to produce the work in a single volume.

A certain degree of systematic procedure has been adopted in the construction of the work, beginning with important matters such as the origin of the violin, its mechanical construction and famous makers. An at least elementary knowledge of these subjects is essential in the intelligent study of the instrument, thereby laying a foundation for clearer understanding of essays upon technical and æsthetic matters which follow.

It would consume many pages of the book were I to attempt to enumerate by name all those broadminded and kindly disposed virtuosos, pedagogues and scientific authorities on the violin who have encouraged me in the preparation of the manuscript and have aided with wise counsel and experience. I thank them one and all, and in particular my former teacher and life-long friend, Eugène Ysaÿe, who so whole-heartedly sponsors the work. May it be known to all those who derive instruction and pleasurable reading from this book that it was the constant encouragement and enthusiastic faith of this great artist which enabled me to labor unceasingly for many years toward its completion.

The preparation of M. Bachmann’s Encyclopedia of the Violin from the practical and commercial standpoint has been a source of great pleasure to the editor, due to the fact that not only has the author covered the entire field thoroughly, but the translator, Mr. Frederick H. Martens, has aided greatly by his lucid translation of the work.

Acknowledgment is also gratefully made to Mr. Jay C. Freeman and Mr. Franz Kneisel for the valuable advice and assistance rendered in the preparation of the volume; to Mr. Felix Kahn and Mr. Maurice Sternberger for the use of reference books and pictures; to Mr. Howard Semple for assistance in the art work and to J. H. Armour and Company, John Friedrich and Brother, August Gemunder and Sons and the Eudolph Wurlitzer Company for information and photographs utilized in articles devoted to manufacturing or mechanical processes.

The plan of the work is to include in a single volume concise and accurate information on every subject connected with the violin. Its fulfillment will be a source of great satisfaction to the publishers.