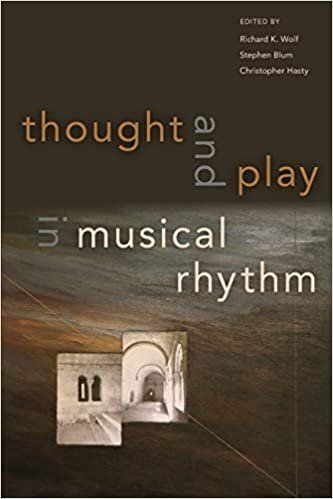 We first conceived of the introduction as a conversation among the three of us, which we began to draft the day after the conference. When that plan proved unwork- able, Richard Wolf made an outline of six topics that seemed to draw together themes from all the chapters, and these served as the basis of the introduction as it appears here. The opening section and the treatment of “Representations” and “Qualities” are Wolf’s work; Blum wrote the sections on “Units” and “Interactions”; and Hasty those on “Periodicity and Cycle” and “Meter.” Some topics are necessarily discussed in more than one section, just as the three of us are continually returning to them in our conversations.

We would like to thank the Harvard University Music Department for support during all stages of this project, and particularly Lesley Bannatyne, who assisted pre- paring the final manuscript.

Thought and Play in Musical Rhythm seeks to explore representations, ideal types, and implicit theorizing of rhythm in relation to aspects of performance that “play”— that pull against these ideal types, resist objectification, and/or are elastic. Our aim has been to incorporate a diversity of musical traditions and scholarly approaches, embracing those of performers, music theorists, and music ethnographers. The performance dynamic implicit in “thought and play” can, with some imagination, be recast in terms of a larger dynamic in scholarly discourse on rhythm and music more generally—that between “universalizing” and “local” approaches. The former include efforts to create overarching models that accommodate the diversity of music and to gain insight into human cognition generally, as well as craft terminologies (meter, beat, etc.) that apply cross-culturally. Local, by contrast, signals attention to musical systems and practices as they are constituted in one region, however narrowly or broadly defined; attention focuses on the specifics of musical interaction, uses of language, and regional histories. Most music scholars attempt to bring out the historical and regional specificity of what they study while also contributing to general knowledge about musical process.

One of the first challenges in writing about and teaching “rhythm” is constituting rhythm as an object of study in the first place. Some concepts of rhythm rely on the presence of regular, perceivable recurrences, making possible such statements as “X is more rhythmic than Y.” When rhythm is understood as the patterning of events in time, all music has rhythm and the problem is to describe or represent rhythm when the patterning is less than obvious. The commonplace elision of two senses of the word—“rhythm” as a structural abstraction and “rhythms” as specific instance— creates another form of confusion in definition, particularly when what is meant by “rhythms” is “drumming patterns.” The challenge of commonplace terminologies remains for the authors of this volume, who do not always agree to use terms in the same ways. For this reason, we provide a glossary highlighting not only local-language terms, but also some differences in usage for English words across the volume.

Etymologies (in various languages) have stimulated imaginative thinking about rhythm. For example, the derivation of “rhythm” from the word “to flow” in Greek supports, via the image of “waves,” intuitive ideas of rhythm as regular, yet elastic and full of movement (see also Stephen Blum’s chapter in this volume). Émile Benveniste has revealed the flaws in this etymology, pointing out that the term in question for “flow” was used at the time in Greek for the movement of a river or a stream and not for the recurrence of waves in the sea (Benveniste 1971, 281–82). Benveniste suggests that a modern sense of rhythm can be traced back in Greek at least to the time of Plato’s Socratic dialogue Philebus (4th c. b.c.e.), which draws an analogy between “intervals” in music and the timing of bodily movements, the numerical regulation of which was called “rhythm” and “measure” (Benveniste 1971, 286).

Despite its dubious historical veracity, the “wave” etymology resonates with various intuitions about rhythm shared by many writers on music and time. It may call forth the tensions between “pure duration” versus “measurable time” in Henri Bergson’s formulation (Bergson 1965 [1922], 50), “inner time” versus “outer time” in that of Alfred Schütz (1951), and time without parts versus time with parts in the Maitri Upaniṣad (6.15–15, cited in Rowell 1992b, 180). The unbroken motion of water in a wave is analogous to the continuity and absence of articulation in inner time, while the sound of each wave lapping onto a piece, boat, or segment of shoreline, creating semiperiodic attacks, may suggest a form of time measurement and division. In understanding rhythm as both a musical and cultural phenomenon, then, it is helpful to keep both operational definitions and local ideologies closely in mind.

This idea of moving among different views on rhythm could fruitfully spill over into more holistic accounts of music generally. Unfortunately, in music textbooks one commonly encounters rhythm, alongside harmony and melody, represented as an “element” of music. This fundamental act of separating rhythm from musical process is, in our opinion, detrimental to understanding the fullness of musical experience. In a similar vein, in Rhythm and Tempo Curt Sachs alludes to “pure melody”—a melody that can recur with different rhythmic settings (Sachs 1953, 18; compare with a similar move by Sindusawarno as discussed by Sumarsam in this volume). But does pure melody exist? In each and every instance melody must have a rhythmic form. Without accounting for the passage of time, “pure melody” could be no more than an ordered set of pitches—though it is hardly possible to think about “order” without invoking time or space. The point is that no actual passage in music is possible without rhythm.

It would be equally problematic to suggest that rhythm could exist without sounding vehicles that produce sameness and difference in timbre, tone, and vertical relations (harmony, etc.). An account of rhythm that embraces musical experience requires attention to much more than the relations among abstracted points in time. It may call for analysis of attack and decay, envelope, interactions among musicians, physical gestures overlapping parts, microtiming, silent reckoning of beats and pulses, and so forth. Africanist scholars of rhythm, accustomed to the subtleties of interaction among instrumentalists, dancers, and singers, have long recognized rhythm’s many facets—what David Locke has called “simultaneous multidimensionality.” But the musical traditions of Africa merely provide salient examples of what is more generally the case. We wish to highlight the many ways musical rhythm persists multidimensionally. A responsible account of rhythm in any one case will allude to this, while recognizing that certain kinds of reduction in complexity are inevitable in putting pen to page.

The authors of the present volume explore what rhythm is and can be across a spec- trum of musical traditions. In rejecting the kind of abstraction that removes “rhythm” from musical process and experience, we nevertheless recognize that the very consideration of rhythm as a topic involves a set of terminologies, methodologies, assumptions, efforts at generalizing, and yes, abstracting that point toward a music-field-wide effort to understand rhythm better per se. In this sense, the “universalizing” writings of Justin London, Michael Tenzer, Jeff Pressing, and others who seek overarching ways of representing rhythm as part of human music-making and cognition provide useful reference points for inspiration as well as resistance. Counterposing these efforts are those of some ethnomusicologists and theorists who have elaborated theories of rhythm or time specific to one civilization, region, or culture—such scholars as Alan Merriam, Ruth Stone, Simha Arom, and Meki Nzewi for Africa; Lewis Rowell for India; Judith Becker for Indonesia; José Maceda for Southeast Asia more generally; and a host of anthropologists with regard to time in a broader range of cultural behaviors and institutions. Clifford Geertz (e.g., 1973) and Nancy Munn (e.g., 1986) provide salient examples of culturally constructed time (and space), while Alfred Gell argues against notions of different kinds of time (Gell 1992). In thematizing the universalist- versus-local tension we ask the reader to question what is to be gained in emphasizing one end of the spectrum or another at any given analytical moment.

Rather than introduce the chapters one by one, we will discuss aspects of these contributions in terms of six broad topics pertinent to the universalist-local dynamic: