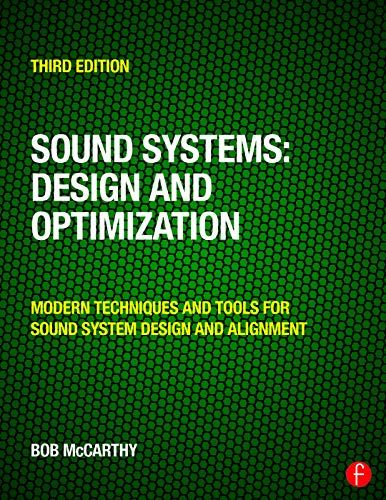 Sound Systems: Design and Optimization provides an accessible and unique perspective on the behavior of sound systems in the practical world. The third edition reflects current trends in the audio field thereby providing readers with the newest methodologies and techniques.

As the only book devoted exclusively to modern tools and techniques in this emerging field, Sound Systems: Design and Optimization provides the specialized guidance needed to perfect your design skills.

This book helps you:


Preface
This book is about a journey. On the one hand, the subject is the journey of sound as it travels through a sound system, then through the air, and inevitably to a listener. It is also a personal journey, my own quest to understand the complicated nature of this sound transmission. The body of this text will detail the strictly technical side of things. First, however, I offer you some of the personal side.

I was supposed to build buildings. Unbeknownst to me at the time, this calling was derailed on February 9, 1964 by the appearance of the Beatles on The Ed Sullivan Show. Like so many of my generation, this landmark event brought popular music and an electric guitar into my life. I became a great enthusiast of live concerts, which I regularly attended throughout my youth at any chance presented. For years, it remained my expectation that I would enter the family construction business. This vision ended on a racetrack in Des Moines, Iowa on June 16, 1974. The experience of hearing the massive sound system at this Grateful Dead concert set my life in a new direction. On that day I made the decision that I was going to work in live concert sound. I wanted to help create this type of experience for others. I would be a mix engineer and my dream was to one day operate the mix console for big shows. I set my sights on preparing for such a career while at Indiana University. This was no simple matter because there was no such thing as a degree in audio. I soon discovered the Independent Learning Program. Under the auspices of that department, I assembled a mix of relevant courses from different disciplines and graduated with a college-level degree in my self- created program of audio engineering.

By 1980, I had a few years of touring experience under my belt and had moved to San Francisco. There I forged relationships with John Meyer, Alexander Yuill-Thornton II (Thorny) and Don Pearson. These would become the key relationships in my professional development. Each of us was destined to stake our reputations on the same piece of equipment: the dual-channel FFT analyzer.

I would like to say that I have been involved in live concert measurement with the dual- channel FFT analyzer from day one, but this is not the case. It was day two. John Meyer began the process on a Saturday night in May of 1984. John took the analyzer, an analog delay line and some gator clips to a Rush concert in Phoenix, Arizona, where he performed
the first measurements of a concert sound system using music as the source with audience in place. I was not destined to become involved in the project until the following Monday morning.

From that day forward, I have never been involved in a concert or a sound system installation without the use of a dual-channel FFT analyzer. I haven’t mixed a show since that day, resetting my vision to the task of helping mix engineers to practice their art. For Don, John, Thorny and many others, the idea of setting up a system without the presence of the FFT analyzer was unthinkable. Seeing a sound system response in high resolution, complete with phase, coherence and impulse response, is a bell that cannot not be un-rung. We saw its importance and its practical implications from the very beginning and knew the day would come when this would be standard practice. Our excitement was palpable, with each concert resulting in an exponential growth in knowledge. We introduced it to everyone who had an open mind to listen. The first product to come from the FFT analysis process was a parametric equalizer. A fortuitous coincidence of timing resulted in my having etched the circuit boards for the equalizer on my back porch over the weekend that John was in Phoenix with Rush. This side project (a bass guitar preamp) for my friend Rob Wenig was already six months late, and was destined to be even later. The EQ was immediately pressed into service when John nearly fell over as he saw that it could create the complementary response (in both amplitude and phase) to what he had measured in Phoenix. The CP-10 was born into more controversy than one might imagine. Equalization has always been an emotional “hot button“ but the proposition that the equalizer was capable of counteracting the summation properties of the speaker/room interaction was radical enough that we obtained the support of Stanford’s Dr Julius Smith to make sure that the theory would hold up.

Don Pearson was the first outside of our company to apply the concepts of in-concert analysis in the field. Don was owner of Ultrasound and was touring as the system engineer for the Grateful Dead. Don and the band immediately saw the benefit and, lacking patience to wait for the development of what would become the Meyer Sound SIM System, obtained their own FFT analyzer and never looked back. Soon thereafter, under the guidance of San Francisco Opera sound designer Roger Gans, we became involved with arena-scale performances for Luciano Pavarotti. We figured it was a matter of months before these techniques would become standard operating procedure throughout the industry. We had no idea it would take closer to twenty years! The journey, like that of sound transmission, was far more complex than we ever expected. There were powerful forces lined up against us in various forms: the massive general resistance of the audio community to sound analyzers and the powerful political forces advocating for alternate measurement platforms, to name a few.

In general, the live sound community was massively opposed to what they conceptualized as an analyzer dictating policy to the creative forces involved in the music side of the experience. Most live concert systems of the day lacked complexity beyond piles of speakers with left and right channels. This meant that the process of alignment consisted of little more than equalization. Because all of the system calibration was being carried out at a single location, the mix position, the scientific and artistic positions were weighing in on the exact same question at the same point in space. Endless adversarial debate about what was the “correct” equalization ensued because the tonal balancing of a sound system is, and always has been, an artistic endeavor. It was an absurd construct. Which is better—by ear or by analyzer?

This gave way to a more challenging and interesting direction for us: the quest beyond the mix position. Moving the mic out into the space left us with a terrible dilemma: The new positions revealed conclusively that the one-size-fits-all version of system equalization was utter fantasy. The precision tuning of parametric filters carried out with great care for the mix position had no justification at other locations. The interaction of the miscellaneous parts of the speaker system created a highly variable response throughout the room. Our focus shifted from finding a perfect EQ to the quest for uniformity over the space.

This would require the subdivision of the sound system into defined and separately adjustable subsystems, each with individual level, equalization and delay capability. The subsystems were then combined into a unified whole. The rock and roll community was resistant to the idea, primarily because it involved turning some of the speakers down in level. The SPL Preservation Society staunchly opposed anything that might detract from the maximum power capability. Uniformity by subdivision was not worth pursuing if it cost power (pretty much nothing else was either). Without subdivision, the analysis was pretty much stuck at the mix position. If we are not going to change anything, why bother to look further?

There were other genres that were open to the idea. The process required the movement of a microphone around the room and a systematic approach to deconstructing and reconstructing the sound system. We began developing this methodology with the Pavarotti tours. Pavarotti was using approximately ten subsystems, which were individually measured and equalized and then merged together as a whole. Our process had to be honed to take on even more complexity when we moved into the musical theater world with Andrew Bruce, Abe Jacob, Tony Meola, Tom Clark and other such sound designers. Our emphasis changed from providing a scientifically derived tonal response to maximizing consistency of sound throughout the listening space, leaving the tonal character in the hands of the mix engineer. Our tenure as the “EQ police” was over as our emphasis changed from tonal quality to tonal equality. The process was thus transformed into optimization, emphasizing spatial uniformity while encompassing equalization, level setting, delay setting, speaker positioning and a host of verifications on the system. A clear line was drawn between the artistic and the scientific sectors.

In the early days, people assessed the success of a system tuning by punching out the filters of the equalizer. Now, with our more sophisticated process, we could no longer re-enact before-and-after scenarios. To hear the “before” sound might require repositioning the speakers, finding the polarity reversals, setting new splay angles, resetting level and time delays, and finally a series of equalizations for the different subsystems. Lastly, the role of the optimization engineer became clear: to ensure that the audience area receives the same sound as the mix position.

In 1987, we introduced the Source Independent Measurement system (SIM). This was the first multichannel FFT analysis system designed specifically for sound system optimization (up to sixty-four channels). It consisted of an analyzer, multiple mics and switchers to access banks of equalizers and delays. All of this was under computer control, which also kept a library of data that could be recalled for comparison of up to sixteen different positions or scenarios. It thereby became possible to monitor the sound system from multiple locations and clearly see the interactions between subsystems. It was also possible to make multiple microphone measurements during a performance and to see the effects of the audience presence throughout the space.
Нажмите, чтобы прочитать больше...