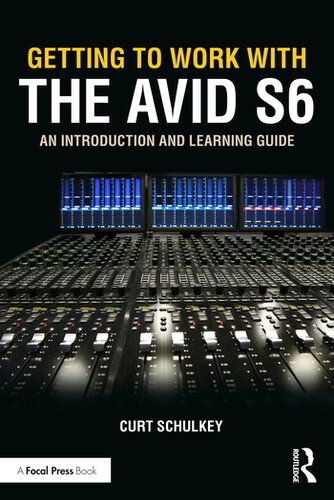 Getting to Work with the Avid S6

This complete guide to the Avid S6 console offers the best techniques and practices from a seasoned industry veteran, Curt Schulkey, for utilizing its unique features and functions.

The Avid S6 was created to be the industry standard virtual mixing console; however, it is so feature-packed that it can be difficult for new users to navigate. This book provides the ultimate guide to breaking down these amazing features and demonstrating how to use them effectively in your next project, with easy-to-follow instructions, rich illustrations, and general real-world advice from the author.

This book takes students from neophyte to high-level intermediate. Readers should begin with a functional knowledge of Pro Tools and general understanding of mixing for cinema, but previous knowledge of mixing surfaces is not necessary as this book provides guidance through rudimentary, basic, and intermediary level workflows.

Curt Schulkey is a post-production industry veteran, and an educator at Loyola Marymount University in Los Angeles. He continues to work as a supervising sound editor, dialogue editor, and mixer on feature films and longform streaming content.

As much as I would like to say “I did it all myself; nobody helped,” that is not true. From the start, Tom Burns, a top mix tech at Sony Studios, offered me enthusiastic encouragement and technical assistance whenever it was needed. Jeremy Davis, also at Sony, contributed his personal expertise and support as well.

Since much of my empirical study of the S6 took place in the Playa del Rey studios of Loyola Marymount University, I have to thank the university at large, and specifically thank Recording Arts Chair, Professor Rodger Pardee for his encouragement, and LMU tech guru Brian Kotowski for his patient assistance. When the pandemic hit, closing LMU’s Playa campus completely, Peggy Rajski, Dean of the School of Film and Television, cleared the way to grant me special access to the locked-down facility. When I needed to explore S6 modules which LMU did not own, Trip Brock at Monkeyland Audio generously opened a mix room for me. Thank you all.

I also want to thank editor Katherine Kadian who’s sleuthing was instrumental in get- ting this book to publication. Thanks, too, to Editorial Assistant Alyssa Turner for keeping the whole publishing process under control.

People plot and people plan
their actions and their lives,
but sometimes things just happen on their own, to our surprise.
This book seems to have begun all on its own.

I have been teaching part-time in the School of Film and Television at Loyola Marymount University for the last several years, sneaking out of work a bit early on Thursday nights to fight my way across Los Angeles at rush-hour, usually arriving in time to start my 7:15 class in post-production sound. When LMU decided to vastly expand their SFTV footprint into a slightly off-campus location, I was happy that it shortened my commute by a few miles. Their new facility was nicely equipped with two new rooms which sported Avid S6 mix surfaces, and the paint was still wet behind the doors when classes were to begin.

In my “day job” as supervising sound editor, I had been working in very close prox- imity to the S6 for the previous few years and had attended a few hands-on orientation sessions when Warner Bros installed their first S6, but most of my real mixing experience was on its predecessor, the ICON D-Control. I had absorbed enough of the S6’s functions from watching mixers and chatting with engineers and mix techs, that I could use it at a very basic level, but I was by no means an expert. I was a bitsurprised, then, to be asked for advice when faculty users at LMU became perplexed as to why their tracks did not appear on the surface, or why no sound was coming out of the speakers, or other seemingly basic questions. I did not know the answer to their questions, but I poked at the surface and prodded into the documentation, and I discovered a sprawling range of “gotcha’s” that could snag the unwary user.

I set about to put together a short instructional paper which would get new users started and maybe keep them going using the S6. I had estimated that 8 to 12 pages would do it. However, I began to find that most problems that people were having were not simple “one-step” fixes; to use the S6 moderately well required a much wider knowledge base than expected.

When my instructional paper hit 80 pages I realized that it had no clear structure, and there were many more elements that I had not yet addressed. It was much too long for a “quick instructional.” I determined that this undertaking would require an entire book. I knew that books are supposed to be written by experts on their subjects, but I felt I was in an interesting position of useful ignorance. I was seeing the S6 from the same perspective as other learners, and this might aid me in addressing their needs. They could not use or appreciate the cool features of this device if they couldn’t find the power switch. So, I jumped in; reading, interpreting, talking to tech experts, and trying to explain, in an understandable sequence, how to use and love this complicated, fun toy, er, I mean, tool.

I hope this brings understanding, power and confidence to novice S6 users, elevating them to intermediate level and beyond.
Нажмите, чтобы прочитать больше...